Layers of cheesy, tender potatoes baked in a skillet with a cream, leeks and gruyere cheese.

This French-style creamy baked potato cake is a crowd pleaser. Tender, golden potatoes are layered with leeks, creme fraiche and lots of cheese.

It’s comfort food times ten, a dish to serve for brunch or an unfussy supper.

Serve this creamy potato galette with a simple salad on the side and you’ve got a satisfying meatless dinner.

You have to admit that French cooks have a way with spuds — or excuse me pomme de terre.

How do they transform the humblest of vegetables into delicious (and definitely decadent) creamy potato galette and potato gratin?

The secret may be that the French aren’t shy about using butter and cream, and potatoes seem to be happiest when cooked in delicious fat.

Julia Child’s classic recipe for pommes Anna is one of the first dishes I attempted from Mastering the Art of French Cooking (it’s in Volume Two).

It stands as one of my all-time favorite recipes, and it requires just two ingredients: Thinly sliced potatoes and yes— lots of butter.

When I prepare potatoes for pommes Anna, they’re thinly sliced and layered into a magically all-purpose cast iron skillet.

Cooking begins on the stovetop, then the pan is placed in a hot oven to finish cooking.

The middle of the galette gets soft and tender, while the top and bottom of the potato cake form a crisp, brown crust.

Those crusted parts taste like the best potato chips you’ve ever had!

This recipe is very similar to that delicious buttery potato cake. It’s technically a scalloped potato dish — or gratin — because it includes milk, cheese and eggs.

The eggs form a light creamy custard as the potatoes bake and the cheese makes a savory crust on top of the cake.

Cheeses to use in a potato cake

Comté and Gruyere are two of the best cheeses to use in gratins, and they’re interchangeable in this recipe.

They’re both cow’s milk cheeses from the Alpine regions of France and Switzerland but they don’t have holes like Emmenthaler.

I think they taste more interesting and concentrated than everyday Swiss cheese — much more nutty and melty. 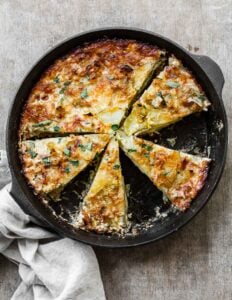 Prevent your screen from going dark

I’m a food obsessed super-taster and professionally trained cook ALL about making cooking fun and doable, with easy to follow tested recipes and incredibly tasty food! Read more about me here.