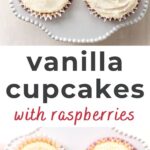 The best moist vanilla cupcakes! Fill them with fresh raspberries and top with buttermilk buttercream frosting for an easy, elegant treat.

The quest for the perfect homemade vanilla cupcake — it became something of an obsession.

For some reason, I woke up one morning with the image of pretty cupcakes in my head, all delicately white on the outside, and brimming with juicy red raspberries on the inside.

I was thinking of my favorite berry-topped moist almond cake, only these had to be two-bite cakes, easy to snack on or share with friends.

I went to work researching, baking and tasting, on repeat.

But it was worth it.

This is the recipe that finally hit the lottery and I’m really happy to share — take it and bookmark this ASAP!

It’s a plain and simple white cupcake, but it has a dreamy soft, moist crumb and unmistakable taste of pure butter and vanilla.

Because it’s a great neutral cake all on its own, this is a cupcake recipe that gives you lots of options.

Keep them plain and undecorated, maybe dusted with some powdered sugar.

Or, if you want to try something other than the tangy buttermilk buttercream frosting here, top off the cupcakes with your favorite frosting.

Whipped dark chocolate buttercream is next on my list 😉

But, if you’re still with me on the fruit-filled cupcake theme, read on.

how to make filled cupcakes

First of all, let me just say that until I went on this cupcake journey, I had no idea that a tool exists just for making little holes in cupcakes.

It’s called a cupcake corer, and it apparently cuts out neat little cones of cake, which eject with one push.

Instead, I grabbed a plain pastry tip out of my gadget drawer, and I used it to carve out a wedge-shaped hollow in my cupcakes.

Don’t have one? An apple corer works just as well.

Or, lacking all of the above, just use a small, sharp knife (a paring knife is perfect) to cut out a small cone about 1/2-inch wide and 1-inch deep.

What to do with the inside of a hollowed-out cupcake

Of course, after making a hole in a cupcake, you end up with cute little wads of cake on the counter.

My suggestion is to call these a “cook’s treat” and carry on.

Or save them and make an easy, instant dessert: Crumble the pieces of cupcake over a bowl of thick yogurt, fresh fruit and a drizzle of honey.

Because I wanted to stay as close to my ideal dream cupcake — cake filled with fresh raspberries — the berries for the filling are simply crushed with a little bit of sugar.

No cornstarch, because that would require cooking the berries and I wanted to preserve their freshness.

That said, if you’re in the mood for filled cupcakes and don’t have fresh fruit, you can use an equal amount of raspberry or strawberry jam instead.

How to store filled vanilla cupcakes

They also keep well for one day, filled and frosted, in a covered container in the fridge.

The filling doesn’t make the cupcakes soggy (just be sure to follow the recipe instructions and drain off the raspberry juices before filling).

For serving, let the chilled cupcakes sit out at room temperature for a few minutes to soften up the buttercream frosting.

To make the cupcakes:

To make the filling:

To make the frosting: 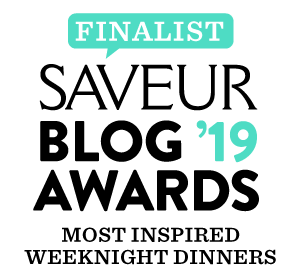