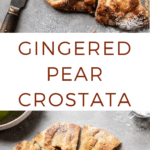 Lemon and fresh ginger-infused pears baked in a rustic free-form crostata (or galette). Make the dough in minutes in a food processor.

This recipe for homemade pear crostata makes a simple open-face fruit tart with layers of flavor and a handful of ingredients: Pears, fresh ginger and lemon enclosed in a tender, easy-to-make pastry dough.

Basically, a crostata is a one-crust pie.

Whether you call it a galette as they say in French, or by its Italiano name as I do, they are one in the same dessert.

Things to love about making crostata:

Are you intimidated by the idea of attempting to make pastry for a homemade apple pie, but don’t want to miss the pleasure of digging in to flaky, buttery pastry and sweet tender fruit? Crostata is the perfect place to start.

2. Crostatas have the ultimate casual vibe — and who doesn’t love keeping things relaxed in the kitchen?

Because they’re baked in a rustic free-form shape without the structure of a pan or pie plate, there’s no need to stress about technical imperfections like tearing, sloppy crimping and cracks.

Unlike a typical two-crust pie, a crostata with pears doesn’t have pastry dough covering its face, leaving a space where the oozy baked fruit peeks out.

However, crust-lovers will appreciate that the edges of a crostata are often the best part.

Those flaky folds around the edge enclose the juicy fruit like a buttery envelope.

My easy to handle pastry dough recipe is a go-to crust for all kinds of fruit crostatas.

It’s lightly sweetened and perfect for filling with whatever fruit is in season.

Try apples for the filling instead, and spice it up with cinnamon instead of the cardamom called for in the recipe.

Note: If you use this pastry dough recipe to make a crostata filled with juicy summer fruit like berries or stone fruits, just be sure to toss them with a tablespoon or two of cornstarch to keep the crust from getting soggy.

The best pears to use for baking galette or pear crostata

In general, pears with a firm texture are best for baking.

Try to avoid using Bartletts or Comice pears because they tend to be softer and juicer, and can turn mushy in the oven.

I like to leave the pears unpeeled, but go ahead and peel your pears if you prefer.

The crostata will be bubbling and juicy when it comes out of the oven, but as it cools the syrupy pears will settle and thicken.

Let the crostata cool to warm or room temperature (if you can!) before slicing.

Serve slices of the crostata topped with ice cream, a sprinkle of powdered sugar and a little more lemon zest, or just as is. 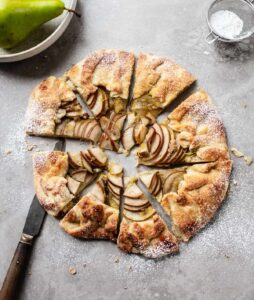 US Customary – Metric
Prevent your screen from going dark

The pastry dough can be made ahead 2 days in advance or wrap well and freeze for up to a month. Use this pastry dough recipe to make a crostata filled with juicy summer fruit like berries or stone fruits, just be sure to toss them with a tablespoon or two of cornstarch to keep the crust from getting soggy.

I’m a food obsessed super-taster and professionally trained cook ALL about creating elevated dinners with everyday ingredients. Find simplified recipes made from scratch and enjoy incredibly tasty food! Read more about me here.