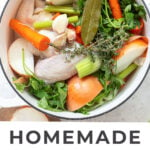 A go-to recipe for basic homemade chicken broth you’ll always want stashed in your fridge and freezer! Use this light, flavorful broth in soup recipes, add to pan sauces, or to enrich the flavor of just about everything you cook. This rich-tasting chicken broth simmers on the stovetop for 3 hours, or cooks in 1 hour in an electric pressure cooker.

It doesn’t take much time or skill to make chicken broth from scratch. But I always wonder why I don’t make it more often! Even though I am a professionally trained cook, I sometimes turn to a box of stock from the grocery store.

But the difference in taste and quality between store bought broth and homemade is really noticeable. Here are three good reasons to make chicken broth from scratch:

One of the very first things taught to beginner cooks in culinary schools is how to make stock. Whether made from beef, chicken, fish or vegetables, broth is a magical elixir, really the foundation of cooking and literally the backbone of any delicious meal.

Chicken broth and chicken stock are two sides of the same coin, and the terms are interchangeable. The slight difference between stock and broth really comes down to cooking time.

Generally, meat bones for stock — what’s often called “bone broth” — are roasted or browned before simmering and are cooked for much longer time. That process releases the most gelatin from the bones and reduces the liquid to achieve a deeper flavor. On the other hand, broths cook for a shorter time and tend to be lighter in color and body.

Learn about the ingredients

The best chicken broth recipe will reward you with a flavorful, but neutral, background for building soups and other dishes. Since broth usually goes into such things as a recipe for chicken soup or a hearty beef stew, it’s best to keep a light hand with seasonings, such as salt or stronger-flavored vegetables.

What to do with chicken stock solids

The cooked pieces of chicken and vegetables in a broth tend to be past the point of tasting good, and the texture can be unpleasantly mushy. But you don’t have to just throw them away.

This recipe yields about 12 cups (3 quarts) of chicken broth. Scale it up or down as needed, using a 1:1 ratio of chicken per quart of water. 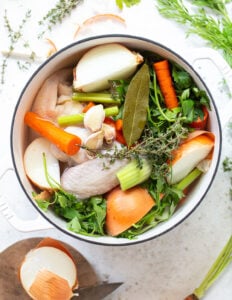 Karen Tedesco
A go-to recipe for basic homemade chicken broth, perfect to stash in your fridge and freezer! Use this light, flavorful broth in soup recipes, add to pan sauces and enrich the flavor of just about everything you cook. This rich-tasting chicken broth simmers on the stovetop for 3 hours, or cooks in 1 hour in an electric pressure cooker.
Print Pin Text Email
5 from 5 votes
Prep Time 10 mins
Cook Time 2 hrs
Total Time 2 hrs 10 mins
Course Soup
Cuisine American
Servings 12 cups

US Customary – Metric
Prevent your screen from going dark

I’m a food obsessed super-taster and professionally trained cook ALL about making cooking fun and doable, with easy to follow tested recipes and incredibly tasty food! Read more about me here.